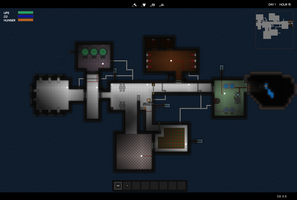 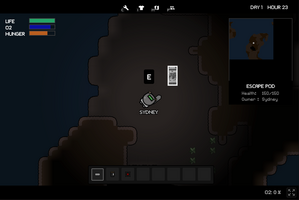 I've been developing a multiplayer focused space-simulation game where you control one pawn and work with other players online. Some of my inspirations of the game include Rimworld, Space Station 13, Dwarf Fortress, etc.. Its still in the very early stages, and my vision for what the game would look like is far from what you currently see, but this version is a good foundation to start off with.

The basic gameplay involves mining resources such as ores, oil, water to create an automated and sustainable economy where you can have breathable oxygen, sufficient power, and raw materials for constructing furnitures and weaponry to defend against hostiles. Right now, its focused on PvE gameplay instead of PvP, as I want a more relaxing gameplay to start off with.

Persistence: As this is an early build, I haven't introduced any persistence mechanism for worlds to keep their state across server restarts during release updates or crashes. I'm a bit torn at whether to implement this, as there are casual sandbox survival games online that skipped this entirely (i.e moomoo.io) , but I think the complexity of the gameplay, and future features I'd like to add (i.e fortress mode with global reputation, visiting other stations), and the annoyance of lost progress due to server crashes, necessitates a proper persistence solution. I would most likely use MongoDB for this, as its JSON oriented documented store fits nicely with syncing game state.

Fortress/Hospitality Mode: There are currently no NPCs, or AI colonists to control. Everyone colonist you see are players, which is not a bad thing per-se, as you can chat with them, and have a more varied interaction.  However, I think adding a fortress mode style gameplay where NPC colonists would arrive as guests as your grow your economy, would add a new dimension to the gameplay. To simplify things in the beginning, instead of allowing detailed control of colonists actions, and allowing them to work/fight for you, they would simply be passive consumers of your economy. Basically, your task is to keep them happy, well fed, and protected from harm. In return they would eventually become citizens of your colony, which will boost your colony's population, and reputation points.

Custom Games: The Fortress Mode gameplay would be my first priority, but I think it would be great if people can create their own mini-games and invite other people to join. Instead of a longer gameplay, they could have short arcade-style sessions such as human ping-pong, capture the flag, deceit-style rounds.